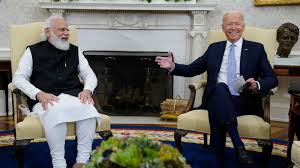 There has been a lot of talk recently about India becoming part of some formal military alliance with the US – in response to the rise and actions of China.

But is this likely?

India prefers to do its own strategic deals on a country by country basis – rather than manage these through a dominant US strategic alliance. For example, India and Australia have a Mutual Logistics Support Arrangement allowing each to uses each other’s bases

Of the four countries speculated to be invited to join the Five Eyes security arrangement (the four are Germany, India, South Korea and Japan) – India is the only one of these four to NOT have a treaty alliance with the US

An example of differences between India and the US is Iran and the Nuclear Non-proliferation Treaty (NPT) – the US attacks Iran on the nuclear issue, sees the NPT as something to be enforced – but India has not signed the NPT itself and sees it as discriminatory

India generally has little or nothing to say about human rights issues in other countries. Whereas the US and its allies such as the UK and Australia are constantly calling out human rights abuses around the world

The US wants “all in” commitment from allies but India has always been non-aligned and refuses to get drawn into “us versus them” views of the world. One current example is India is finalising a logistics deal with the UK while also negotiating a similar deal with Russia

India is content to be “the world’s biggest democracy” but is not evangelical about it, accepting that all countries are different – a sharp contrast to the US wanting to remake countries in its own image and championing democracy for all