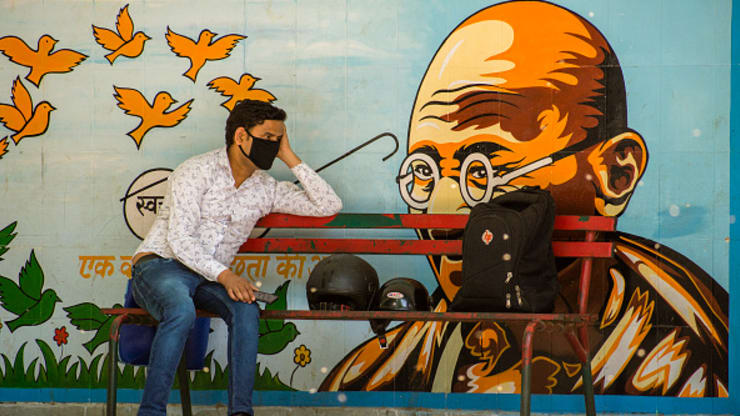 The Mahatma Gandhi memorial in New Delhi, known as Raj Ghat, expresses his values – it is peaceful and quiet, a green open space with a marble tomb in the middle, marked by one word “Ram” – God, the word Gandhi uttered when shot on 30 January 1948. Here there are no lengthy accolades, just a simple and lasting tribute.

I first visited this on a warm afternoon with time alone – but you are not alone for long in India. I was soon joined by a family of four, there to show the children and pay their respects to this great human being. In doing so, their shining eyes invited me into their circle, we talked, laughed, turning back regularly to gaze at the marble tomb. The moment was defined by simplicity and love.

This was how he lived – you can see this in Mumbai at Mani Bhavan (Gandhi House), a three story home with shuttered windows, a residence that Mahatma Gandhi was able to use when in that bustling city. The house is in a leafy and relatively quiet street.

The austere dwelling seems a long way from our consumer society, for here in Mani Bhavan, the feeling is respectful and quiet. No one rushes. This was indeed the man who said there was enough in the world for everyone’s need but not for everyone’s greed.

Knowing this, it becomes redundant to ask what Gandhi means for our modern world. He means everything.

The world is nervously watching the rise of China, and the contest for leadership in a rapidly changing world. Believing that in situations like this, hatred is the real enemy, Gandhi urged us to hate the sin, love the sinner. His view on answering violence with violence was “An eye for an eye makes the whole world blind”.

Gandhi knew that around the world, people are different – and they see the world differently. He knew that much hostility began because we each tend to believe that our own world view is the correct one.

There is a story that showed how different this person was – while boarding a moving train one day, one of Gandhi’s shoes slipped off and fell upon the track. As he was unable to retrieve it, Gandhi – to the astonishment of his fellow travelers – calmly removed his other shoe and threw it down the track to where the first had landed. “The poor man who finds the shoe lying on the track,” Gandhi explained, “will now have a pair he can use.”