Many of us had “high hopes” for the Regional Comprehensive Economic Partnership (RCEP). In a world of “trade wars” this seemed a way to create the world’s largest trade pact. Exciting stuff.

RCEP wanted to cover the 10 member countries of the Association of Southeast Asian Nations (ASEAN), and the six countries with which the ASEAN bloc has free trade agreements (FTA). These included Australia, China, South Korea, Japan and New Zealand. 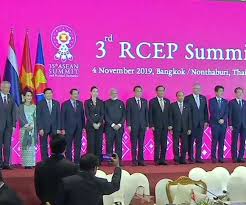 But now it seems to have gone. India has called a halt to it. Or, to be more accurate, inflexible negotiations on India’s concerns have pushed India out.

Here is a problem for RCEP – under their proposed deal, India faced a potential flood of Chinese imports.

Just look at the current global situation and you might understand the Indian approach.

The Indian Government of Prime Minister Narendra Modi has rightly highlighted that “India’s farmers, traders, professionals and industries have stakes in such decisions.” Seems RECP negotiators were not listening.

We have to “walk in India’s shoes” to fully understand this – a decision to safeguard the interests of poor and effort to give an advantage to India’s service sector while not shying away from opening up to global competition across sectors. That is the Indian view.

The view from India was they would have been required to eliminate tariffs on 74% of goods from China, Australia and New Zealand, and 90% goods from Japan, South Korea and ASEAN. In the midst of an economic slowdown, India “faced the risk of becoming a dumping ground for cheap Chinese goods.”

There was a special concern of Chinese agricultural products hurting Indian farmers.

RCEP advocates have hurt themselves by refusing to “walk in India’s shoes”. That’s no way to negotiate.