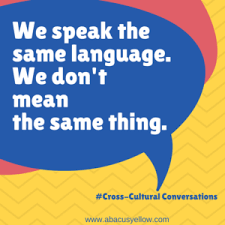 To do business we need to have some idea how people will behave. That is why operating globally and across borders requires a high level of cultural awareness.

But if all we do is gain a general idea of the culture and how they differ from us, we are likely to be unprepared.

We are amazed when the person we are dealing with does not fit the culture picture. The American we are trying to impress is in fact quiet and retiring, not brash and out there as we thought. Or the Indian we expected to be incredibly polite and reticent turns out to be brash and in your face.

Why do we get this wrong?

We have only asked one question instead of digging deeper. We have asked “What culture do they have and how does it differ from ours” – it is an important question but this is only the beginning of being prepared.

What questions should we ask in addition to the big “culture difference” one? For this I turn to a global leader in understanding culture, Andy Molinsky, a Professor of Organizational Behavior at the Brandeis International Business School. He’s the author of Global Dexterity and Reach. Here are his three questions:

Question 1: What do you know about the region? Just as it is useful to learn something about culture norms when diagnosing your situation, it is good to learn something about region norms. For example, if you were doing business in the United States and assumed that people from the Northeast would be quite similar to people from the South or from the Midwest, you might find yourself surprised. Similarly, you’d be misguided if you assumed that Southern and Northern Italy are identical or that people from rural and urban areas of China tend to act in similar ways.

In India, the boss of an established company like Tata Sons is going to be very different from the CEO of the latest startup or the new telco.

Question 3: What do you know about the people? Finally, ask yourself what you know, or what you might be able to find out, about the people you are interacting with. Are you communicating with a 60-year-old senior executive or a 20-something manager?

In India age differences matter enormously – there is a real generation chasm between the under 40’s and the over 40’s. People who are older are often more likely to reflect the norms of the overall society.

It would also be useful to know if the people you are interacting with are locals, born and raised in that particular setting and without extensive travel experience, or if they are cosmopolitans, with extensive travel background. Locals are much more likely to reflect the norms of the immediate region you are in, whereas cosmopolitans are likely to be open to a wider range of potential behaviors.

In many East Asian and Southeast Asian cultures, such as India, China, and Korea, relatively indirect forms of communication are used, especially from a subordinate to a superior — whereas superiors in these cultures are often quite direct with their subordinates.

Finding the answers to these questions before you cross cultures can be tricky, but it is possible. Books and articles will often give you some insight into these nuances, but one of the best ways to anticipate what you’ll encounter is by talking with expats: people similar to you who have studied, lived, or worked in the country in question.

Doing your homework before entering a new culture is one of the keys for success. But unless you ask the right questions, you might end up mistakenly overlooking the real differences that matter.